First Time Founder Challenge: Moving off the couch and into a real structure

My company Wethos recently closed our first round of funding which means the chaos of hiring, building a product, creating a communications strategy, and solidifying a brand happened all at once and really threw everyone for a loop. Suddenly we were going through this terrifying & exciting phase of bringing people into our company who had strengths where we didn’t and beginning to create a team of people that had an additional stake in our company.

You know what they say, move fast and break things!

You know what else they say? Sometimes when you break things you end up breaking people instead.

We learned this lesson the hard way, we had a Front End engineer quit just a month into his job, he burned out almost immediately because we were working in an environment of chaos with an unclear path and unclear goals. We thought we were running agile, but we were really just giving marching orders to the people who had a key stake in what we were doing, instead of listening to their expertise and taking a step back.

Literally my lead developer^ (don’t worry, she’s still with us)

This is a mistake I think a lot of first time founders make, they’re so used to having their hands on everything in the company that when they finally hire people to help take over some of those tasks, it can feel threatening and sometimes daunting.

Suddenly there are people who know more than you, but.. you’re the founder! How can that be?? You had this idea, you executed on it from scratch, and you raised the money that put everyone in those seats to begin with, how could they possibly know more than you??

As a founder, it’s your job to be the “why”, and create a team to help figure out the “how”. You hire people to help you figure out “how” because you’ve been doing that by yourself or with your cofounders for the last probably 1–2 years. The “why” is how you started the company, how you came up with the idea, and ultimately lead to the decision to keep at it.

When you bring experts in you do it so that the “how” isn’t falling completely on your shoulders any more, and you have a team of support to get you from point 1 to point 1.1 to point 1.2 and so on and so forth.

LET’S HIRE PPL THEN YOU DOPE

It was recently brought to my attention that although we thought we were running agile, what we were really doing is running waterfall and pretending that it was agile. We all understood the concept of agile, but as first time founders no matter how many books or blogs we read, nothing was going to show us and the team what it really meant to run agile if we hadn’t experienced it.

For a week I worked closely with my Product Designer Ro to put together a workshop and presentation on how to run agile within the company. We’re a small team of 8, so working together closely shouldn’t be as much of a headache as it was and I knew we had to fix it. I then told everyone to clear their schedule for Tuesday and booked a room for half of a day to go through everything. 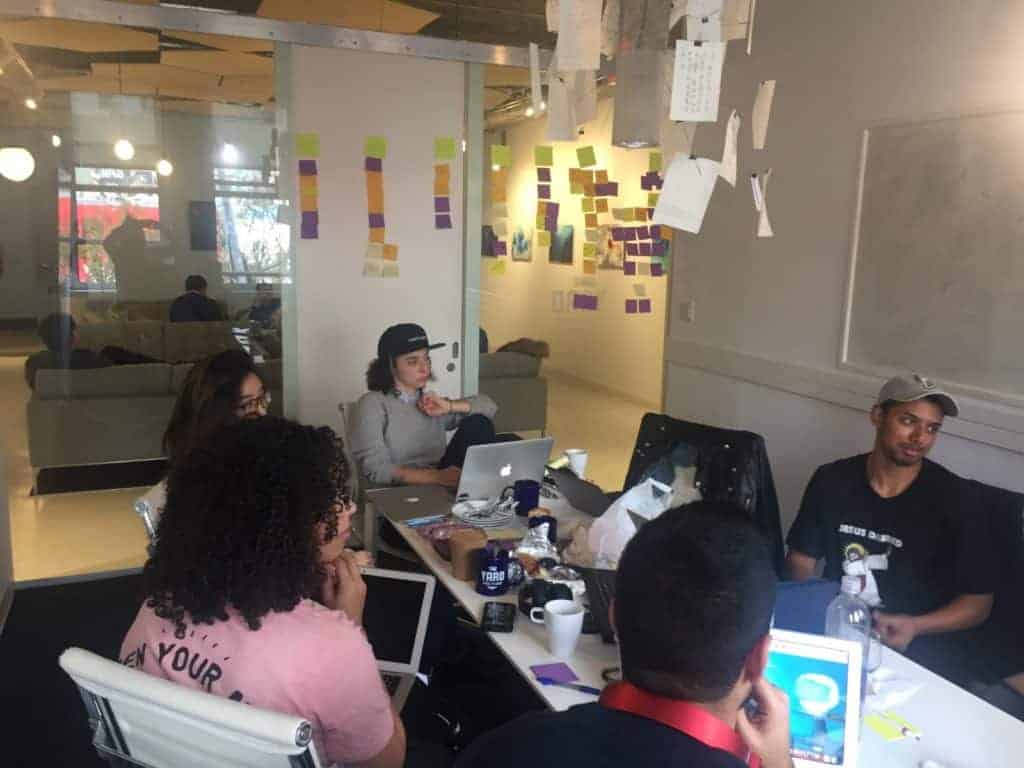 We brought in breakfast so everyone would love us (that’s Ro in the hat, hey!!!!)

We started with our company values to get everyone pumped up. We knew we wouldn’t be able to get everyone on board if they weren’t clear on what we expected of them as employees, and what the larger vision of the company was.

Then Ro (our PD) ran through a deck he put together and compiled all of the best learnings from his past experiences at start ups to help educate the team on what it means to do agile and the differences between what we were currently doing and where we wanted to move. This was a tough conversation that I had to prep the team for ahead of time, letting them know that we all take responsibility for past mistakes and that we were going to have a very honest and candid conversation about where we can improve.

Me to my cofounders

After we did our retrospective and gave the team a high level idea of what agile really is, we went through a quick game that allowed us to really focus on the process without the emotional attachment to what we were building. It’s called the Morning Routine agile workshop, and I highly recommend it to anyone who is trying to fix or understand their process better.

How does it work? 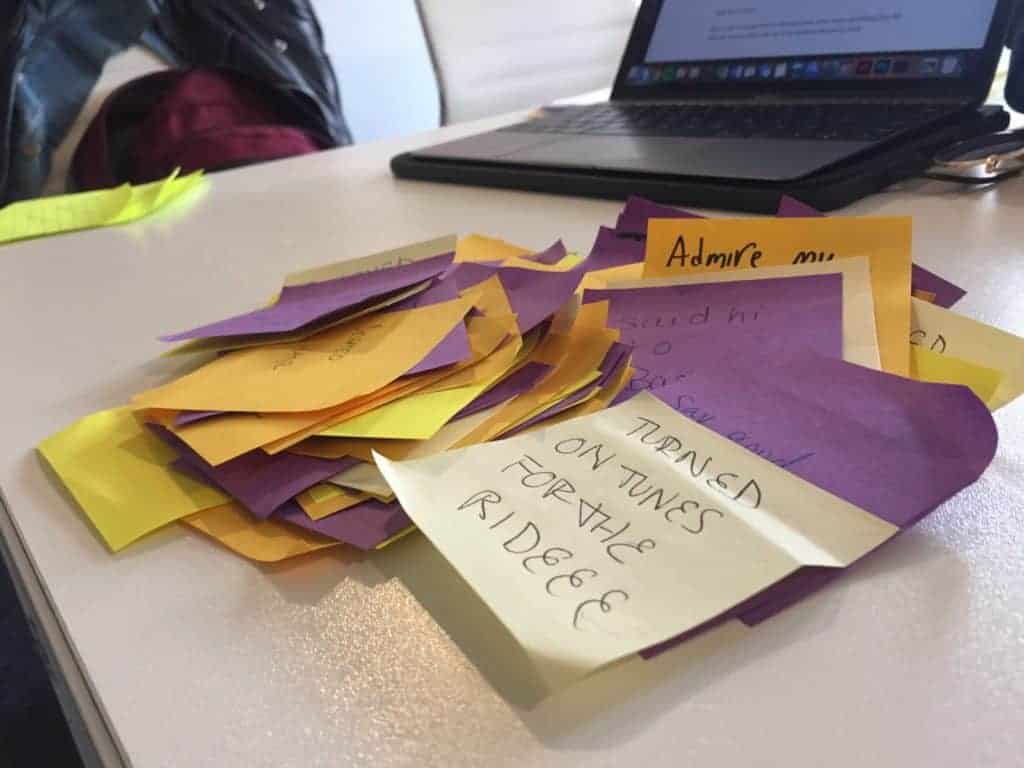 This simulated a brainstorming session, where everyone has their ideas written down and considered while moving through the process.

Step 2: Everyone categorized their ideas under similar themes (i.e. brushing your teeth or washing your hair is in “grooming” and so on and so forth). 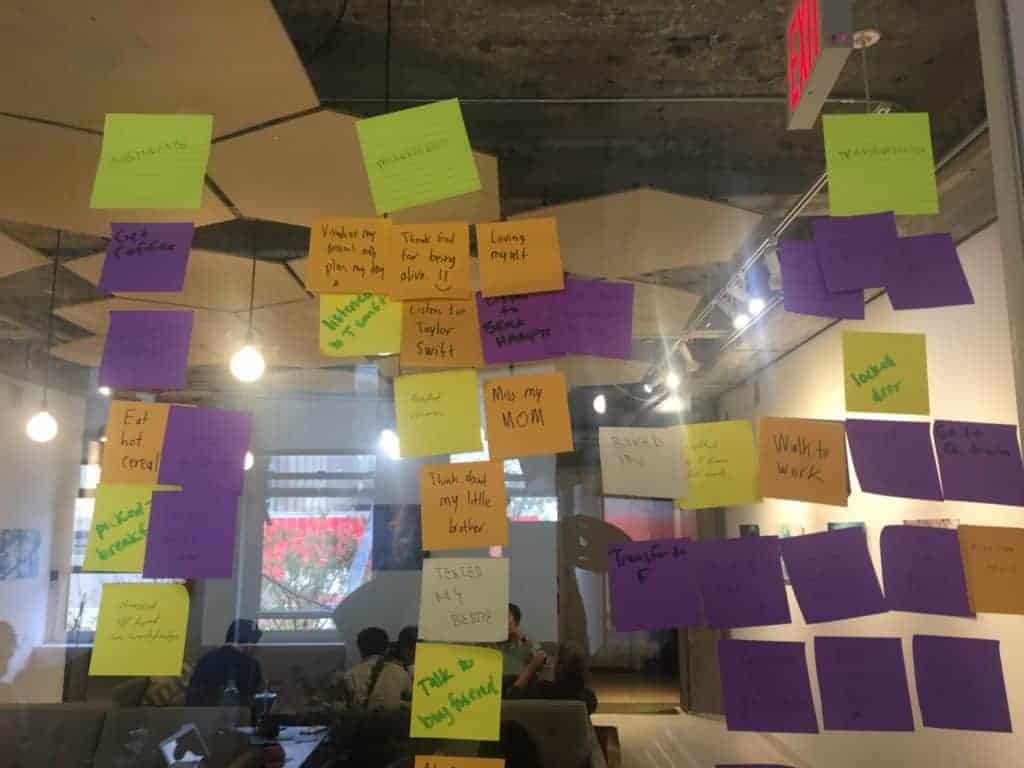 Some of our categories came down to eating, getting dressed, transportation, etc.

Step 3: We went through a story telling exercise where we rearranged our categories by time, so the story had a beginning, middle and end to it. This reflected what could be a user journey, understanding where all of the different categories fit into the story sequentially. 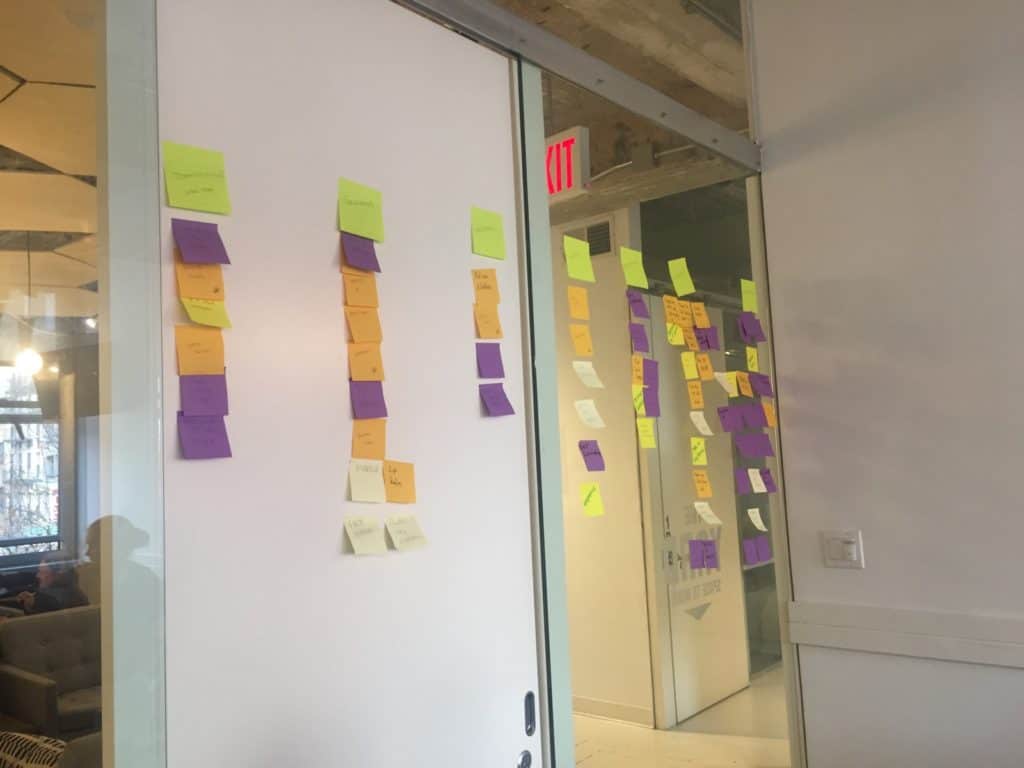 The team understood was able to work together to help sequentially organize all of our routines, aligning on what came first, what came in the middle, and what was last with all of the key stake holders present.

Step 4: Prioritization of activities. We had everyone hash out what was the most important in each category from top to bottom. So walking and feeding the dog came before making the bed, which allowed people to understand how certain things can and should be more important than others, and the absolutely “nice to haves” fell to the bottom (sorry “saying by to bae”, you’re just not a priority right now!!!) 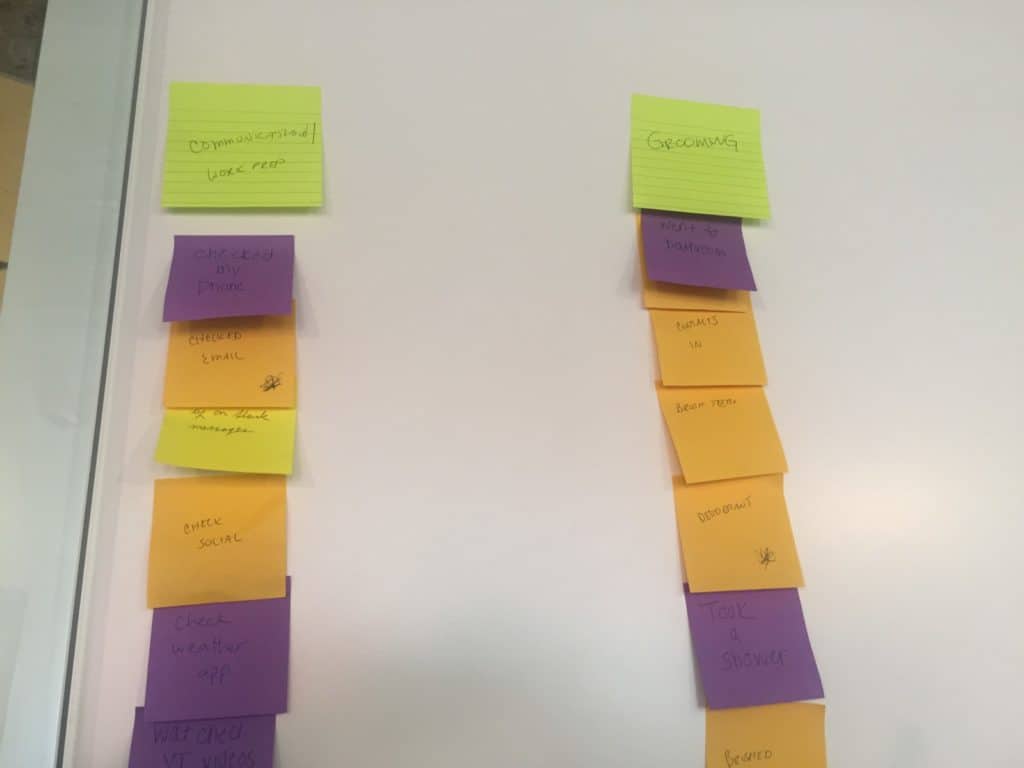 Step 5: Here comes the constraints. We put a time constraint and challenged everyone to think about a situation where their alarm didn’t go off, and they had 15 minutes to get ready and out the door or they were going to miss an important meeting. We went through each category and split the most important stuff to come out on top (we starred the Post-It where we identified this breaking point) while less important things fell to the bottom. This showed a clear line between what was absolutely necessary to get out the door and get to work on time vs what would be nice to have if we hadn’t woken up late.

The first step to solving any problem is recognizing and admitting that you have one. I had many tough conversations with my cofounders in the past 2 weeks about our learned behavior from past experiences and how we weren’t properly empowering our team to perform to the best of their ability, because we lacked the trust to listen to our people rather than tell them what to do. With emotions running high and everyone caring so deeply about what we were building, we failed to recognize our own flaws and once we did, we were able to start finding solutions to fix it.

Sometimes you don’t have all the answers, and that’s why you have a team

Running a company is absolutely the most challenging thing I’ve ever experienced, besides admitting that running a company is challenging and that I don’t know everything. I’m writing this post because I know that many other teams probably struggle with what I’m describing when they’ve gone through a jarring transition like hiring 6 more people who have voices and opinions and ideas of their own. We knew we had to fix this now or else hiring even more people would become a total nightmare, so that’s exactly what we set out to do.

This post was written by Rachel Renock, CEO + Creative Director of @wethosco and member of The Yard: Lower East Side. To learn more about Wethos and how to get involved, check out their website at https://wethos.co/ and follow Rachel’s journey as a small business founder on Medium.