On Saturday, some of New York’s brightest minds got together for TEDxNewYork, a full day event chock full of moving talks from groundbreakers in the furthest depths of their fields.

Expanding Your Range of Power in the Workplace

Adam Galinsky delivered the first talk of the day, and he certainly set the precedent. He began by bringing light to an enduring struggle in the workplace- the struggle of power. Wherever you stand in society, you’ve been assigned a role. With that role comes an inherent range of power. Galinsky explains that if you’re starting a new job or have a low status in society, you face an upward climb.

People with a low-power double bind are often punished for acting assertively, even though they need to do so in order to get ahead. The important part, he mentions, is understanding the power that you have and how to gain momentum appropriately using specific tools. Generally speaking, the key to expanding your range lies in confidence, flexibility, passion and allies.

Adam Galinsky, chair of Columbia Business School’s management department, delivering his talk, “How to speak up when you feel like you can’t” Photo courtesy of TEDxNewYork

What happens when you ask someone about their passion? Their eyes light up, they become more animated and the pitch of their voice increases. Then what? In return, your eyes light up, you become more animated and suddenly your voice is higher than you knew possible. Passion has the ability to transfer from one person to another and put people on the same playing field. Speaking passionately makes you more engaging and more likable and thus increases your power.

Neuroscientist Rebecca Brachman delivered another favorite talk of the day. Rebecca, in conjunction with scientists across the globe, is seeking a cure for depression. Depression and other mental illnesses have been a topic of contention throughout history and are only now receiving the attention they deserve. 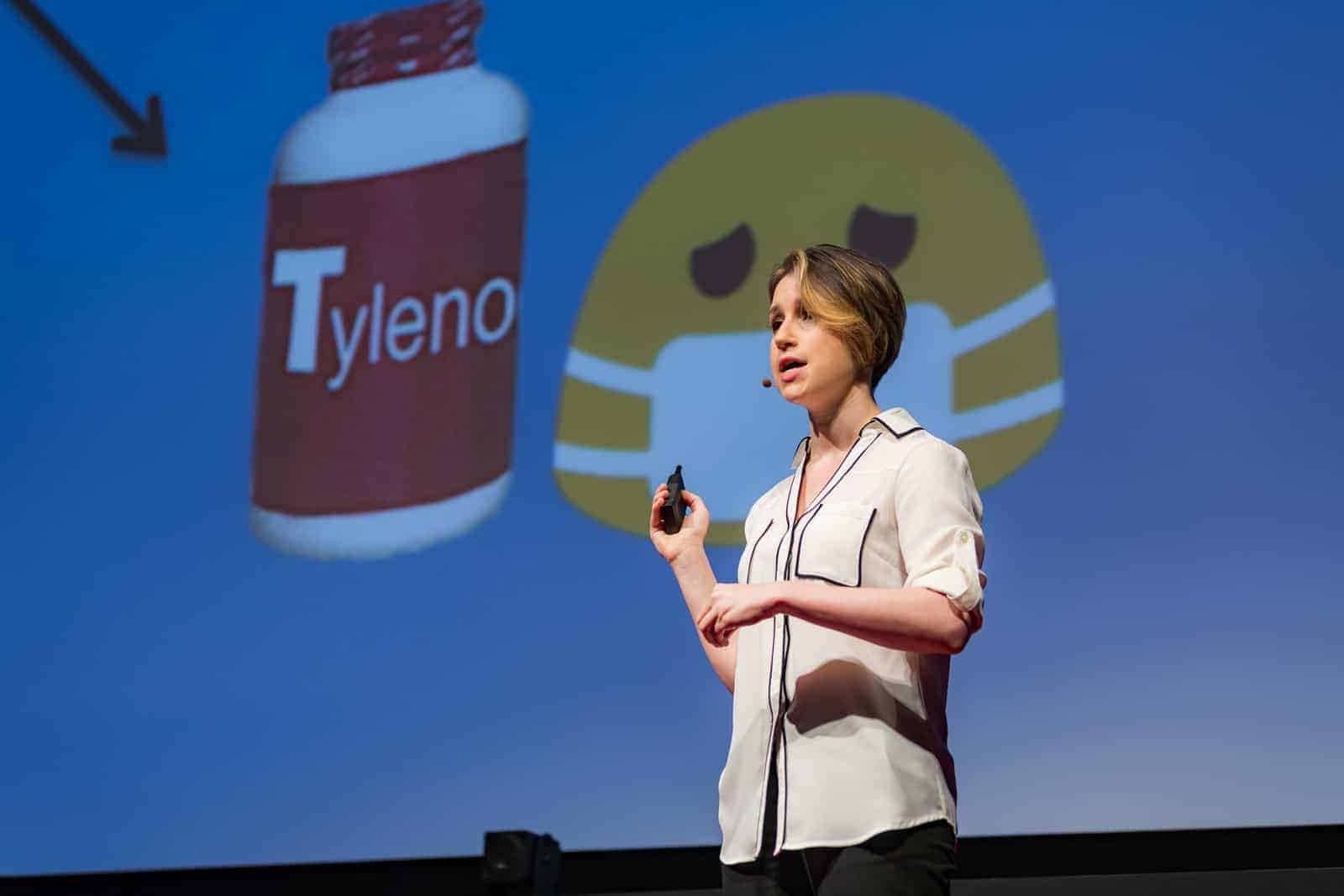 Rebecca Brachman, neuroscientist, on “Could a drug prevent depression?”  Photo courtesy of TEDxNewYork

Rebecca’s talk began with a brief history of tuberculosis. Initially, tuberculosis was considered the disease of vampirism. It took years before tuberculosis was finally considered a medical condition. Early in testing, doctors discovered a drug that they believed to be a cure. They recorded that patients were no longer in their beds but dancing in the hallways. In actuality, the patients were not cured but experiencing a sense of elation. The doctors concluded that the drug was ineffective with side effects of inappropriate happiness. What was the drug? Prozac, a modern day treatment for depression. Prozac was not approved for treating depression until 1987.

While Rebecca and her colleagues were looking for a preventative “cure” for depression associated with high stress situations (think PTSD or people living in high risk conflict zones), they found a solution in an unexpected place. A drug used to tranquilize animals. A drug sought after by some for its sedative and hallucinogenic properties. The drug is Ketamine. Just one dose of Ketamine (aka Special K) showed long-lasting effects in preventing depression in mice in otherwise stress-inducing situations. Can you believe that?

Comedian Jo Firestone on “Everyone is terrible, and so are you”  Photo courtesy of TEDxNewYork

One talk after another, every speaker had the attendees at TEDx totally engaged, uplifted and excited to further their individual impacts in the world. The sessions were broken up by thoughtfully curated entertainment, like Kristin Lee and Matthew Lipman of the Chamber Music Society of Lincoln Center and youth poet laureate Nkosi Nkululeko.

And, of course, who could forget the convincing argument “Everyone is terrible, and so are you” by comedian Jo Firestone. She certainly left me convinced. We’re all truly terrible, but after the talks at TEDx, I’d say we all came out just a little smarter, a little more inspired and slightly less terrible than before.